Good point; there doesn't seem to be much info out there about where it sank. I figure that around 80-90% of the truth is hidden from us. I suspect that the internet will be rife with Conspiracy theories soon, if it's not already.

It's anyone's guess whether that's true.

Attached are a couple of other links for you.

Sending Peace and Positivity your way,


Deepwater Horizon in flames after the explosion.
At 9:45 P.M. CDT on 20 April 2010, during the final phases of drilling the exploratory well at Macondo,[48] a geyser of seawater erupted from the marine riser onto the rig, shooting 240 ft (73 m) into the air. This was soon followed by the eruption of a slushy combination of mud, methane gas, and water. The gas component of the slushy material quickly transitioned into a fully gaseous state and then ignited into a series of explosions and then a firestorm. An attempt was made to activate the blowout preventer, but it failed.[49]
At the time of the explosion, there were 126 crew on board; seven were employees of BP, 79 of Transocean, there were also employees of various other companies involved in the operation of the rig, including Anadarko, Halliburton and M-I Swaco.[50] Eleven workers were presumed killed in the initial explosion. The rig was evacuated, with numerous injured workers airlifted to medical facilities.[5] Support ships sprayed the rig with water in an ultimately unsuccessful bid to cool it and prevent it from capsizing. This was also intended to buy time in order to attempt to end the flow of oil and gas that were feeding the flames from coming up the riser pipe. If successful, this action would have reduced the flames and allowed special teams of firefighters to board the stricken rig and extinguish the remaining fire.[51]
After burning for approximately 36 hours, Deepwater Horizon sank on 22 April 2010. The remains of the rig were located resting on the seafloor approximately 5,000 ft (1,500 m) deep at that location, and about 1,300 ft (400 m) (quarter of a mile) northwest of the well.[39][52][53]
The resultant oil spill continued until July 15 when it was temporarily closed by a cap.[54] Relief wells to allow permanent termination of the flow are to be completed in August 2010.[55] The spill has the potential to cause massive damage to the ecosystem of the Gulf coast and waters. In the worst case oil could affect oxygen levels in the water,[56] cause devastation to the food chain,[56] seafood industries,[57] and to life deep at sea and along hundreds of miles of coastline,[58] requiring years or decades for the ecosystem to recover.[59] Some estimates of the spill make this the largest oil spill ever in the Gulf of Mexico and US history.[60] 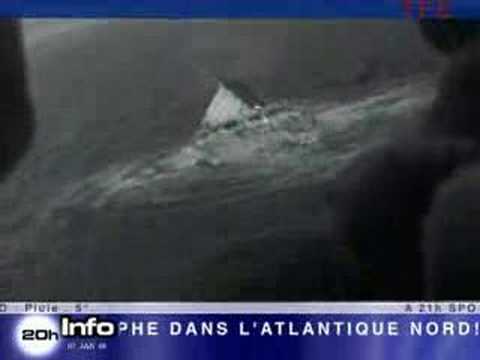