Hitler As taught in a 1950's American curriculum
Ask Trapper

Hitler As taught in a 1950's American curriculum

As taught in a 1950's American curriculum

You may find it interesting to see just how much "history" has evolved since the 1950's. As recorded immediately after the war, the gas chambers and incinerators never existed and Hitler was not only after the Jews. I remember the teacher mentioning the six million myth, and that the source of that myth was recent and not credible.

I was fortunate enough to have attended a school system which was onto the conspiracy to destroy American education very early. This school system held onto the old books because the new books "were not as good". As students we scoffed at the old dog eared texts, but as an adult I am thankful for having received a true American education, which has given me the ability to see the revisionist "holocaust" for what it is.

I am confident that what you will see here is the real truth about Hitler and that if this real information as taught in American schools before they were destroyed does exist anywhere on the internet it has been shilled into oblivion and cast into a murky backwater by Google.

Hitler was brilliant, delusional, and partially insane. His main goal with World War 2 was to spawn a global empire ruled by a supreme race of blonde haired blue eyed people called the Aryan race, which were, according to Hitler both physically and intellectually superior to all other people.

To make it possible for a new Godlike aryan race to take over and rule the world, Hitler believed it was necessary to rid the world of severely lesser races by holding them in detention camps and working them as slaves and animals for whatever they were worth. The Jews, being among the brighter lesser races were mostly assigned to build radios and other electronics. Hitler had no intention of starving, killing, or exterminating the people held in the detention centers, he intended to work them as slaves to support the war effort. This is easily proven by the fact that rather than receive a bullet to the head when found, they were loaded onto trains and taken to the camps. This point was not made in the curriculum however, it is just an obvious point.

The detained were treated like garbage. Most notably, they were forced to sleep on wooden racks side by side and stacked in layers with the other detainees, having no privacy or personal property. German winters are cold, and the sleeping areas were not heated, and to make things worse the ends of the housing buildings were open to the cold so even body heat did little to warm them up. Many people died from the poor conditions in the sleeping areas.

Diseases were not treated in a proper manner. Lice infestations ran rampant. Proper bathroom facilities were not provided, so often people would urinate where they slept, and if they were on the upper layers it would trickle down and fall on the people below them.

Farther along into the war, as the allies destroyed food supplies in an effort to starve out the German people, the detention camps got their food supplies cut first. It was never Hitler's primary objective to starve the people in the camps, but when you have desirables and soldiers to feed, obviously the people in the camps had their food cut first. Fortunately this happened mostly in the last six months of the war, when Germany was finally being defeated. Many people died. Towards the end so many people were dying of disease and starvation that there was a body disposal problem, and mass graves were dug to bury them. In the textbook pictures all the bodies that were in the mass graves were starved to the bone, obviously dead from starvation alone. If the gas chambers were real, there would have been fat and healthy bodies in those pits, and there were NONE. The curriculum NEVER mentioned gassing of anyone, it simply made the following points very clearly:

1. Hitler wanted to defeat the world entirely, and sought this goal to an extreme, a total nutcase extreme. Germany had superior manufacturing, intellect, and technology and Hitler pushed the limits of what it could do too far. Arguably the biggest mistake was to try to push down through the Arab world and into africa, while taking on Russia at the same time. Had Hitler focused on Europe and America until they were defeated he probably would have eventually won, but as a psychopath he could not see the limits.

2. Hitler sought to place at the top of the world social structure a supreme Aryan race with superior intellect, morality, and blonde haired blue eyed physicality. The American curriculum said once again Hitler had to have been crazy to seek this, because he himself did not match his own image of a superior race. I tend to think he was probably not stupid and was simply in his own delusional way being "honest" with himself, believing he could create a legacy of something better.

3. Hitler wanted to work the people in the camps as slaves and not kill them. Their skills were assessed and they were assigned work which most closely matched their abilities. IF Hitler really wanted them all killed outright, this asessment of their abilities would never have been done. The curriculum specifically stated that the Jews were assigned work which required an education and higher skills.

4. In total, 270,000 people died of cold, disease, and starvation. If the allies had arrived even a month later the casualties would have been far worse, many times worse because up until the end when Germany was finally falling apart, the people in the camps were at least not starved. The entire starvation problem was rooted in the fact that towards the end so much agricultural ability had been destroyed that even average German citizens were not getting enough to eat. Granted, the prisoners never had luxury food but there was not an overall goal to just kill them all.

5. Though there was a disproportionately high number of Jews in the camps, the majority was other classes of what Hitler considered undesirables. These were Gypsies, Trade Unionists and other people Hitler considered to be politically inconvenient or genetically inferior.

The curriculum also focused on other aspects of Hitler´s rule that I won´t go into, because it does not make the main point of what I am writing here - NO WHERE in the curriculum was the number of "six million" ever mentioned. And though the curriculum did state that Jews were unfairly targeted, and talked about the trains as well as mainstream Europeans refusing to believe the camps even existed, it never said Hitler just wanted to kill them all, it only said that they were not treated well at all.

For a truthful Historic precedent, I would like you to take a look at the following monument, which was put in place shortly after World War 2 and has the truth embedded in stone: 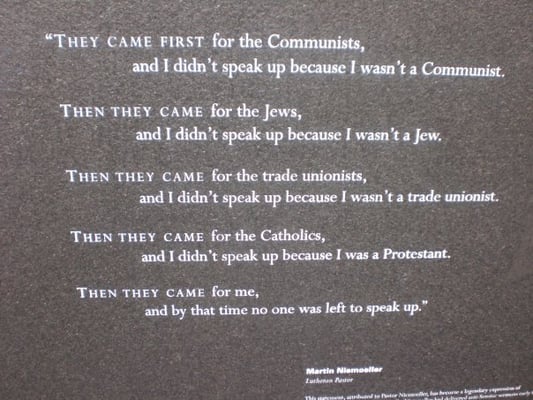 One thing is CERTAIN: When history is accurately recorded, Hitler's prison camps were NOT about the Jews alone, it was about ALL people Hitler considered "undesirable".

Before I go on my closing rant about this topic, I would also like to add what people I knew who actually liberated the camps had to say about what happened when they arrived.

The prisoners were starved beyond belief. They ran crazed up to the fences screaming to the soldiers for whatever food they could get. The soldiers were well supplied and had candy bars, but their commanders ordered them to NOT give the prisoners candy bars because something that rich and sweet would be such a shock to the starving prisoner's systems that they would die if they ate them.

None of the people I have spoken to over the years mentioned anything about finding incinerators or gas chambers. They found mass graves full of starved dead bodies, and lots of people who would soon have been in those graves absent rescue.

But as the modern day Zionist would have you believe, everyone is out to get the Jews. Forget all about the countless others who died in the camps along with the Jews. Forget all about the millions of Americans and Europeans who died fighting Hitler, NONE OF THEM MATTER. Only the fact that a fair number of Jews ended up in the camps and died is what you should consider, because a single Jewish death counts for more than millions of dead non Jews, and I will tell you why, in a zionist´s own words:

"Our race is the Master Race. We Jews are divine gods on this planet. We are as different from the inferior races as they are from insects. In fact, compared to our race, other races are beasts and animals, cattle at best. Other races are considered as human excrement. Our destiny is to rule over the inferior races. Our earthly kingdom will be ruled by our leader with a rod of iron. The masses will lick our feet and serve us as our slaves." (Israeli Prime Minister Menachem Begin in a speech to the Knesset [Israeli Parlament], quoted by Amnon Kapeliouk, "Begin and the Beasts," New Statesman, June 25, 1982)

And THAT sounds an AWFUL LOT LIKE HITLER, DOES IT NOT?

While Hitler wanted to make a master race that was different from his own self, the Jews consider themselves to be the master race. While Hitler enslaved the undesirables in the prison camps and was obvious and honest about it, the Zionists instead DE CLARE their superiority by blowing our children's brains out with brain destroying vaccines, while the rest of us get nailed by fluoridated water, toothpaste and mouth wash, as well as GMO's and antidepressants while being targeted by every last effort to corrupt our culture and destroy our education and printed works.

The Zionists did not accomplish this by being superior, they accomplished it simply by being too deceptive and evil for good thinking people to comprehend -

When we destroyed Hitler we did not gain a victory, we instead simply diverted our destiny into the hands of even worse tyrants - a tribe of psychopaths who do everything Hitler sought to do and more under a veil of lies and secrecy. Hitler was a much more desirable adversary, because at least he was honest about it.

Use this report as a litmus test. Copy and paste it to forums and blogs everywhere. This is truthful accurate history, and any forum or blog that bans you for posting it can be easily singled out as a lie factory.