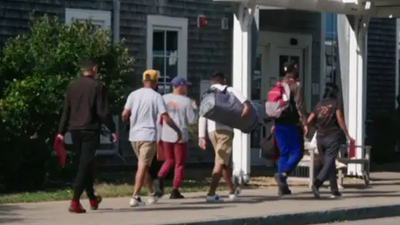 Massachusetts Gov. Charlie Baker said the migrants were being provided with "short-term shelter". Wait until a couple more planeloads arrive...

A statement from the Governor's office confirmed the move: "Yes, Florida can confirm the two planes with illegal immigrants that arrived in Martha’s Vineyard today were part of the state’s relocation program to transport illegal immigrants to sanctuary destinations."

A spokeswoman for DeSantis continued: "States like Massachusetts, New York and California will better facilitate the care of these individuals who they have invited into our country by incentivizing illegal immigration through their designation as ‘sanctuary states’ and support for the Biden administration’s open border policies."

"As you may know, in this past legislative session the Florida legislature appropriated $12 million to implement a program to facilitate the transport of illegal immigrants from this state consistent with federal law."

DeSantis isn't just set on Martha's Vineyard, however, stating this week that migrants could also be sent "to other 'progressive' states whose governors endorse blatant violations of federal immigration law."

"It is not the responsibility of Floridians to subsidize aliens to reside in our state unlawfully; we did not consent to Biden’s open-borders agenda," he said.

Massachusetts Gov. Charlie Baker said the migrants were being provided with "short-term shelter". His spokesperson said: "The Baker-Polito Administration is in touch with local officials regarding the arrival of migrants in Martha’s Vineyard. At this time, short-term shelter services are being provided by local officials, and the Administration will continue to support those efforts."

Wait until a couple more plane-loads arrive - how soon until President Obama's favorite playground starts to look like San Francisco?