duh! It's a sanctuary city, after all! 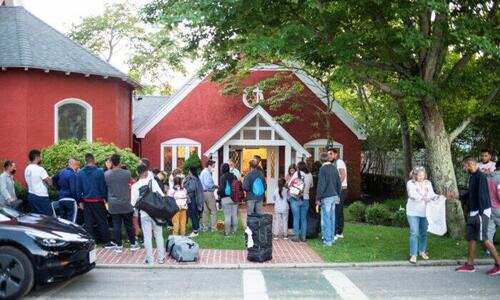 Authored by Rita Li via The Epoch Times (emphasis ours),

Some of the roughly 50 illegal immigrants who flew to Martha’s Vineyard in Massachusetts last week only to be deported, said they would like to return to the “beautiful” elite island home of wealthy families in the summer.

Catholic Charities in the Diocese of Fall River told the National Catholic Reporter newspaper that three out of the dozens said they wouldn’t mind returning to Martha’s Vineyard given “how beautiful” the island is, after being bussed away to a nearby emergency shelter in Barnstable County last Friday.

“But everybody else said, ‘We don’t have a preference of where we go. All we want to do is work, have a home, and live peacefully.’ That was the universal message with all of these migrants who came to us,” said the head of the Catholic Charities, Susan Mazzarella, whose team is involved in work to help immigrants transition to life in America.

The two planeloads of illegal aliens landed on the Massachusetts island from Texas on Sept. 14, charted by Florida Gov. Ron DeSantis as part of his $12 million state relocation program transporting illegal immigrants to “sanctuary destinations.”

Being the enclave of wealthy and political elites, including former President Barack Obama, the Massachusetts resort area previously served as an alternative medical care site during the COVID-19 pandemic and sheltered displaced Louisiana residents after Hurricane Katrina.

The Venezuela asylum-seekers were on the move again two days after their arrival, however. In a Sept. 16 statement, the local government announced the state was sending the immigrants to temporary accommodations at Joint Base Cape Cod in the neighboring Barnstable County, where individuals and families will receive humanitarian support and dormitory-style shelter spaces.

It claimed the island communities are not equipped to provide sustainable accommodation, according to the Friday press release.

Although just five Martha’s Vineyard homes could be enough to accommodate the 50 illegal alien arrivals, Breitbart News reported on Wednesday that no residents opened their homes to the arrivals. One local resident told the New York Post that Obama should open his $12 million estate as a processing center.

“Our administration has been working across state government to develop a plan to ensure these individuals will have access to the services they need going forward,” Massachusetts Gov. Charlie Baker said. 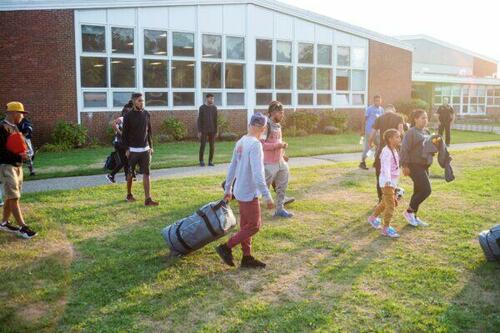 Despite the White House and Democrats calling the transport of asylum seekers to Democrat-controlled sanctuary destinations a “political stunt,” Republican governors who made similar moves in border states including Florida said the actions were partially to protest inadequate federal efforts on the southern border security under President Joe Biden.

Communications Director Taryn Fenske from DeSantis’ office said last Friday: “States like Massachusetts, New York, and California will better facilitate the care of these individuals who they have invited into our country by incentivizing illegal immigration through their designation as ‘sanctuary states’ and support for the Biden administration’s open border policies.”

Unidentified immigrants filed a lawsuit on Sept. 20 against DeSantis, claiming they were subject to a fraudulent and illegal scheme. The governor said the recent move “was clearly voluntary” as all the illegal immigrants had to sign consent forms and were given maps and numbers for services in the area.

Illegal aliens from countries including Venezuela are driving the recent increase in arrivals at the U.S. southern border. Out of the about 158,000 illegal immigrants who crossed at least once in August, over 55,000 came from Venezuela, Cuba, and Nicaragua—a jump of 175 percent from August 2021.