Re: A Heretic's View of Flu's Role in Health and Disease by NaturalRN ..... Natural Healing & Herbal Solutions w/Unyquity


Awesome quote...that's definitely one to remember!  Elbert Hubbard's essay, "An Alliance With Nature" is also very insightful, especially considering the time period in which it was written... 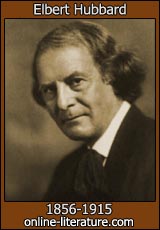 An Alliance with Nature

My father is a doctor who has practised medicine for sixty-five years, and is still practising.

I am a doctor myself.

I am fifty years old; my father is eighty-five. We live in the same house, and daily we ride horseback together or tramp thru the fields and woods. To-day we did our little jaunt of five miles and back 'cross country.

I have never been ill a day--never consulted a physician in a professional way, and in fact, never missed a meal through inability to eat. As for the author of the author of A Message to Garcia, he holds, esoterically, to the idea that the hot pedaluvia and small doses of hop tea will cure most ailments that are curable, and so far all of his own ails have been curable--a point he can prove.

The value of the pedaluvia lies in the fact that it tends to equalize circulation, not to mention the little matter of sanitation; and the efficacy of the hops lies largely in the fact that they are bitter and disagreeable to take.

Both of these prescriptions give the patient the soothing thought that something is being done for him, and at the very worst can never do him serious harm.

My father and I are not fully agreed on all of life's themes, so existence for us never resolves itself into a dull, neutral gray. He is a Baptist and I am a Vegetarian. Occasionally he refers to me as "callow," and we have daily resorts to logic to prove prejudices, and history is searched to bolster the preconceived, but on the following important points we stand together, solid as one man:

First. Ninety-nine people out of a hundred who go to a physician have no organic disease, but are merely suffering from some symptom of their own indiscretion.

Second. Individuals who have diseases, nine times out of ten, are suffering only from the accumulated evil effects of medication.

Third. Hence we get the proposition: Most diseases are the result of medication which has been prescribed to relieve and take away a beneficent and warning symptom on the part of wise Nature.

Most of the work of doctors in the past has been to prescribe for symptoms; the difference between actual disease and a symptom being something that the average man does not even yet know.

And the curious part is that on these points all physicians, among themselves, are fully agreed. What I say here being merely truism, triteness and commonplace.

Last week, in talking with an eminent surgeon in Buffalo, he said, "I have performed over a thousand operations of laparotomy, and my records show that in every instance, excepting in cases of accident, the individual was given to what you call the 'Beecham Habit.'"

The people you see waiting in the lobbies of doctors' offices are, in a vast majority of cases, suffering thru poisoning caused by an excess of food. Coupled with this goes the bad results of imperfect breathing, irregular sleep, lack of exercise, and improper use of stimulants, or holding the thought of fear, jealousy and hate. All of these things, or any one of them, will, in very many persons, cause fever, chills, cold feet, congestion and faulty elimination.

To administer drugs to a man suffering from malnutrition caused by a desire to "get even," and a lack of fresh air, is simply to compound his troubles, shuffle his maladies, and get him ripe for the ether-cone and scalpel.

The one theme of Ecclesiastes is moderation. Buddha wrote it down that the greatest word in any language is Equanimity. William Morris said that the finest blessing of life was systematic, useful work. Saint Paul declared that the greatest thing in the world was love. Moderation, Equanimity, Work and Love--you need no other physician.

In so stating I lay down a proposition agreed to by all physicians; which was expressed by Hippocrates, the father of medicine, and then repeated in better phrase by Epictetus, the slave, to his pupil, the great Roman Emperor, Marcus Aurelius, and which has been known to every thinking man and woman since: Moderation, Equanimity, Work and Love!