Most Americans Believe Migrants Should Be Transported To Sanctuary Cities: Poll by turiya ..... The Turiya Files

"63% said it was hypocritical for sanctuary cities to complain about migrants being sent there..."

A new Rasmussen / RMG Research poll has found that a majority of Americans believe illegal immigrants should be sent to sanctuary cities instead of forcing border states to shoulder the burden. The poll comes as a record 2 million migrants have been arrested in just 11 months. 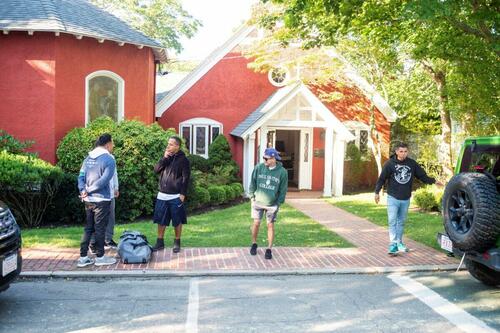 Last week, the governors of Texas and Florida sparked national outrage from the left after they transported illegal immigrants to Texas and Washington DC - both virtue-signaling 'sanctuary cities' that panicked over the influx of people they couldn't actually take care of.

According to the new poll, however, most Americans are supportive of sending migrants to such cities in the future - with 51% of registered voters saying 'yes' - while 29% said 'no' and 21% were unsure. Another 48% 'strongly or somewhat approve of border state governors sending some illegal immigrants to places like New York, Chicago and Martha's Vineyard,' according to the Daily Caller, which noted that 38% 'strongly or somewhat' disapproved of the plan.

Most respondents thought places like Martha’s Vineyard were being inconsistent: 63% said it was hypocritical for sanctuary cities to complain about migrants being sent there. The majority of likely voters (61%) thought it was fair to say that cartels had more control over the southern border than the U.S. government, and 60% thought the government’s failure to control the southern border was a bigger problem than border states sending migrants to places like Martha’s Vineyard. -Daily Caller

"This polling confirms what all Americans know to be true: the open-borders policies of the Biden Administration are wildly unpopular," said America First Legal vice president and general counsel Gene Hamilton in a statement to the Daily Caller News Foundation. " It also confirms that the American people desire immigration enforcement at our border that is at least as effective as what the elites in Martha’s Vineyard have — where illegal aliens are promptly deported within 24 hours of their arrival."
https://www.zerohedge.com/political/most-americans-believe-migrants-should-be-transported-sanctuary-cities-poll